After a year and a half of waiting for the rain to fall to improve conditions for release of the Jewel beetles, we finally got to visit the South Burnett Region and catch up with Ian Crosthwaite who was a long-time committee member of the Kingaroy Landcare Group. 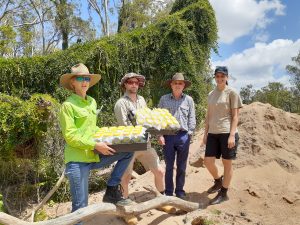 During our visit, Ian showed us around Durong, Boondooma and Brooklands where we released a whopping 4,000 beetles throughout these three areas.

We were excited to find jewel beetle larvae and adults along Middle Creek at Brooklands.  It meant that insects that were released a few years ago had survived the ongoing drought and continued to breed. 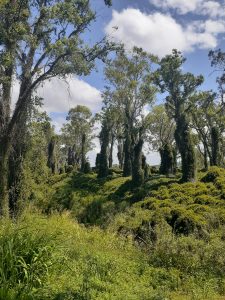 We will be looking forward to another trip closer to the end of the year to monitor all the release sites and to see how our insects are going.

Our Mission
Inspire environmental regeneration through community engagement by educating the community, carrying out environmental conservation works, providing native plants to our local and farming communities, and providing bio-security options and resources