Controlled Burn Out At Widgee 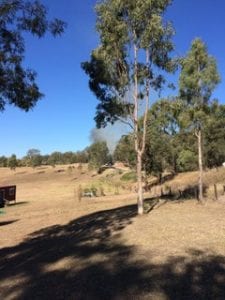 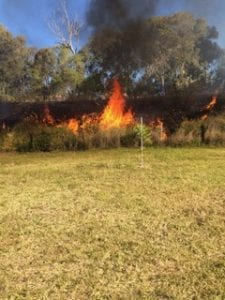 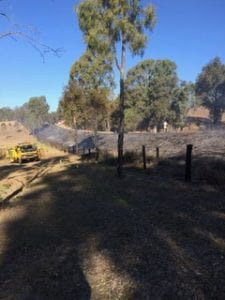 [/one-third]
On Monday 13th August, the Widgee Rural Fire Brigade & other members of the Regional Rural Fire Brigade & safety organisations conducted a fire safety burn-off along the Gympie Woolooga Road from Boundary Road to the Little Widgee Creek area.
Previously the Rural Fire Brigade Officers conducted property surveys & visited property owners affected by the proposed burn.
Gympie Landcare’s own Vice-President Gloria Robertson & her husband Doug, were among property owners involved in the exercise.
Doug & Gloria happily reported that it was a professionally run event, with no danger to people or property & they both underscore the need for constant monitoring of fire danger on property boundaries.
Gloria also reported that it did bring back her chilling memories as a child in Kenya, of her family house being burnt to the ground. “We had the Indian Ocean 200m from the door, but no Rural Fire Brigade. We are so lucky in Australia”, she commented.
Last heard of Doug was somewhere on the boundary eradicating cobblers pegs that survived the burn.
For more information on how to prepare for bushfires click here