You are here: Home / Landcare Practices / Dealing With Frost On Your Property 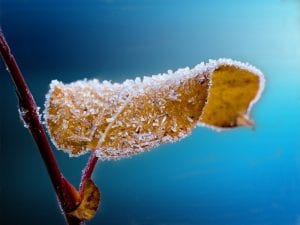 Many native plants tolerate temperatures down to -15°C if the weather gradually becomes colder and colder into winter.  However the same species may die at -1 to -2°C when a frost comes after a warm period.  We often can’t see the frost coming or have no time to prepare when we do.  There are a few proven techniques that may be employed, depending on your circumstances and the scale of the problem, to shield your young plants from frost damage.  Fortunately, most of our frosts are radiation frosts and we seldom see a black frost (as in 2007) when the air temperature drops well below zero killing or injuring even mature trees in areas well above normal frost pockets and ice forms on the walls and roofs of buildings.

The best defense is to use frost-resistant plants in the first place.   Many species in the landscape are frost sensitive and yet become established in nature and many tough species have transient juvenile frost susceptibility.  Such species can be planted in spring but may need to be watered or they may be planted in early autumn when the ground is moist and temperatures are dropping.  Even if they frost off in winter they can re sprout from below ground in spring and by the following winter they have their much more resistant adult leaves e.g. spotted gum.

As borne out by forestry practice later supported by the results of CSIRO research, the best form of frost protection on a

large scale is bare, moist earth.  Remember mulch does not generate useful warmth and anything that comes between the earth and the plant merely insulates and prevents warmth rising e.g. how many times have you seen frost on top of a dried pad of cow manure with none on the ground around it?  Unless in an erosion-prone situation, at least 85% of the ground should be cleared of all grass and weeds (living or dead) and other debris (including any mulching) should be raked away from individual, susceptible young plants in late autumn to about a 2m radius – and of course, raked back in spring.  Grass may have to be poisoned in wide strips and/or scraped off.  When very dry it also pays to water the bare soil to increase its heat-holding capacity.

Here a frost-hardy species is planted to protect one that is sensitive.   I’ve used the “natural” approach i.e. with wattle covering rainforest species but, the wattles must be managed or they will take over.   The ultimate trick here would be to use short-lived cover-crop species.

Sprays such as Envy® do work at least for light frosts but only on the foliage sprayed.

This involves the deliberate creation on a smoke haze to prevent cooling of the ground by radiation.  The disadvantage is it can’t work when there are intermittent breezes and it requires someone to stay up all night and function at the bottom of a rum bottle. 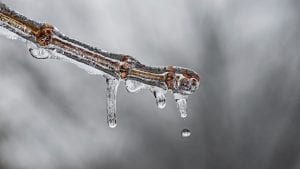 This is forced convection of cold air from near the ground and keeps the air moving so that frosts can’t form.  It has been used in fruit orchards.  Again the equipment and running costs are quite expensive but one could imagine a household fan blowing around a prized specimen plant in the garden.

These can be as primitive as bonfires or oil pots lit and kept stoked through a plantation and, if they smoke – all the better.  Drawbacks are the provision of fuel and the risk of wildfire under dry conditions (when frosts often form).  On a small scale, a hurricane lantern can be placed under individual trees to provide warmth.

Some people have attempted to make a rudimentary assessment of species frost-hardiness. Click here for the list