You are here: Home / Community / FINAL WEEK OF FIND A FROG IN FEBRUARY 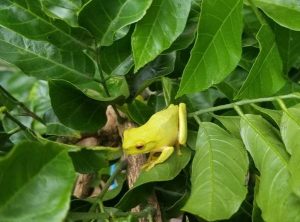 Find a frog February 2021 is well underway! Despite the relatively dry conditions for this time of year, the FFF team and our local frog finders have been off to a great start, conducting frog monitoring surveys and workshops, and searching high and low for our local FROGS!

So far this month, the team has held a number of fun and factual frog workshops and monitoring surveys at:

We have another busy week ahead with workshops and surveys scheduled with Noosa District Landcare in Pomona and Burgess Creek Bushcare group at Sunrise Beach.

So far, we have received around 600 frog records, encompassing 24 species, of which 3 are vulnerable.

Our dedicated frog finders have made a number of interesting discoveries, including:

Numbers of incoming records are low this year due to the dry conditions but it’s still incredibly useful for people to report even one frog as it adds to what we know of a species’ distribution. Monitoring an area previously surveyed provides information about the persistence of species over time under the adverse conditions of late. Some of our frogs, even the most common species, may be struggling with the regular, prolonged dry periods we have been experiencing and it is especially critical now to understand how they are faring. We encourage the community to keep an eye out and send in their photos and/or recordings of calls.

It’s not too late to get your frog records in to findafrog@mrccc.org.au. And we still have a long way to go to match last year’s record tally of 7000.

So, Citizen Scientists of the Fraser Coast, Gympie, Noosa, and Sunshine Coast Council areas, grab your torches, cameras and phones and get outside at night to find some frogs this February!

This program is generously supported by councils of the study area – Sunshine Coast Council, Noosa Council, Fraser Coast Regional Council. We and the frogs are immensely grateful.

For any further information, please contact the Mary River Catchment Coordinating Committee on 07 5482 4766.