You are here: Home / Community / Germinating Seeds in Winter – Tips From the Nursery 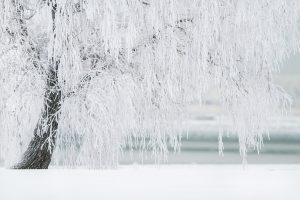 Winter is here! Time to give up on germinating seeds and shift to knitting little jumpers for the seedlings we already have. Or perhaps I’ll organise an old-sock-drive, the ones with threadbare holes in the toe would do the job nicely; slip them over a pot and leave an escape hatch for any masochistic seedlings to grow out the top and brave the winter chills if they dare!

Honestly though – winter doesn’t spell the complete end to seed germination. There are probably quite a few seeds out there in the wild still glad for an opportunity with the good soil moisture, to have a go a life. But the rate of germination and growth for most species is very much reduced with the cool nights and mornings that herald winter.

In the nursery, there is still plenty of bench space to keep filling with more plants – the autumn rain gave the landcare CLS field crew a good opportunity to plant a few project sites that were waiting patiently for the summer dry spell to end. Plenty of other landholders have also been getting into autumn planting as well; the result is a considerable dent in our stock numbers for several popular species.

So, propagation goes on and this is where a certain bit of physics comes to the fore.

It’s not all that technical, but it does wonders for plant production. Inertia is in lay-terms the tendency of something to keep going, or doing, what it is already doing. Thermal inertia means something will keep being warm, until the rest of the universe convinces it to cool down.

If you have solar-heated hot water at home, you’re tapping into thermal inertia. Using the sun’s energy to warm water, then store it away for it to release that warmth later, when you turn on a tap. Thermal inertia is also what’s behind the ‘passive heating’ or ‘thermal mass’ designs in architecture.

If you’ve ever watched a snake or lizard warm themselves in the sun, you’ve witnessed nature being crafty with thermal inertia. The animal will circulate their blood near their skin, gather the warmth of the sun, then when they’ve warmed up enough, they can redirect most of their now-warm blood flow internally and retain that warmth for a decent period of the day (or night).

These same techniques come in handy for the nursery also. The days are still warm enough in a sunny spot to promote decent germination and growth. But the nights are longer.

The challenge really, is to catch and keep some of the day’s warmth to keep the night chills at bay.

I noticed this challenge being well met last week, as I moved the afternoon’s effort of seed-sowing to a new home – some spare space in one of the Biocontrol propagation ‘tunnels’. That particular area faces the sun for most of the day, with a dry gravel floor. As I entered, I could feel the warmth not only in the air but also in the gravel. Through the day, both the air and gravel had absorbed warmth from the sun. Gravel, having a far better thermal inertia than air, would be radiating its warmth back into the propagation area throughout the evening, probably enough to still keep the tunnel several degrees warmer than outside by sunrise the next day. The few degrees difference, spread across the night, will hopefully prompt the seeds and seedlings in that location to grow as fast as their comrades did outdoors back in March.

Not all the nursery can be boosted along by such a method – or at least, not without considerable outlay in infrastructure. Trying to gather daily warmth to keep all our plant stocks growing faster through winter would also give us plants that were not ‘hardened’. We could nurse seedlings to a plantable size in a warm sheltered place, but they’d not fare well if taken out into the wilds! So to keep our stock suitably ready for field conditions, there has to be an element of exposure to the prevailing conditions, be that summer heat or winter frost. The slower growth, in the end, is better than growing a plant that doesn’t survive after planting.

Our plants have it a bit tougher than they need to though; a side-effect of growing them above ground in little containers. Naturally, a plant would have its green bits exposed to these chilly nights, but the roots would be in a more temperature-stable setting – mother earth. Nursery plants have the added challenge of their roots being in a small volume of earth up on a bench, where the night air can circulate around and cool both the shoots and roots. There are ways to alleviate this of course, but again it can mean added infrastructure/costs (heat-mats, solar-heated water circulating under benches, etc), or seasonal changes in procedure (e.g. placing stock on ground instead of benches). Each ‘solution’ comes with its own extra challenges. So for now at least, we’ll continue with our usual grow out process. If the threat of frosty mornings becomes a concern, we can make use of the thermal inertia of our water supply: our tanks will be warmer in the mornings than the air, so running irrigation in the coldest spell (usually a few hours either way from sunrise) can lift the temperature in and around our plants. Just as long as we don’t drown them in warmth!