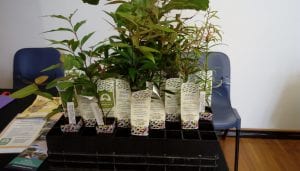 Gympie Landcare sponsored plants for the filmmakers’ corner at the Gympie Heart Of Gold International Short Film Festival. All the film makers were given a tubestock plant on their arrival at the festival. “Without the filmmakers, a film festival will not happen and there are so many important stories to be told”, said Lyndal Kenman, who took care of all the film makers. “The film makers were particularly delighted to receive a plant and many of them commented on what a great idea a plant was as a gift”.

The Film festival is a 4-day event that showcases the best short films from around the world and locally.  For Gympie Landcare, it offered an opportunity to create awareness for our nursery and the important work being done by our organisation.