Hoop Pine – The Monarch of the Forest 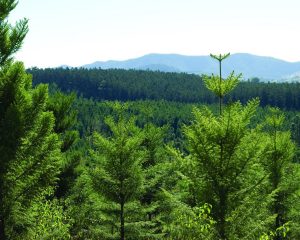 When one thinks of hoop pine the following spring immediately to mind: Monarch of the Forest, lofty, majestic. This species (Araucaria cunninghamii) is self-evident on the range-tops of coastal and sub-coastal Queensland and New south Wales, even reaching PNG.  How did this tree of geological times, so susceptible to fire, survive into the modern era so well?

Ecologically, hoop pine can be both a pioneer and/or a climax species.  On deep soils it sends down deep taproots but on poorer soils or amongst rocks its roots spread laterally to capture a site and out-compete neighbouring vegetation.  Nevertheless, successful plantations require fertile deep soils because of inter-tree competition on poorer soils.  However, grass can hold the tree back for many years and establishment can be speeded up by twenty years or more by initial grass death or removal.  Frost can also kill young trees, but it can survive under hardier species to triumph eventually.  In maturity it is usually an emergent towering well above the canopy of the rainforest below whereas amongst eucalypts its ultimate height is much reduced, and it becomes a mere companion in the absence of fire, its mortal enemy.  In fact, these timber towers can constitute most of the biomass of a rainforest community the evidence for which can disappear for many years after logging since the timber rots quickly in the ground

Once established hoop pine withstands the rigours of drought, sleet and occasional light snow.  It produces female cones after about 14 – 18 years but male conelets (with their pollen) take 18 – 25 years to arise.  Time means nothing to this survivor from the ancient eras of plant evolution and it possesses modes of growth peculiar to Families of fossils.  Stem buds always grow upwards as stems, but branch buds grow only laterally as branches.  Cone production usually follows a four-year cycle of intensity unless promoted by excessively wet years.  Although pollination may occur between winter and summer depending on population genetics seeds always fall at about Christmas.

Records were destroyed in a disastrous fire in the archives of the Department of Forestry, but it appears that the first successful attempts at domestication began soon after the first world war right here at Amamoor when Overseer Murphy and his co-workers were encouraged to try planting the tree in the forest.  At first, a line of rainforest was cleared and planted with hoop pine seedlings.  After a few years it was seen that they grew well, so successively wider swathes of rainforest were cleared until they dared attempt to try establishment on a completely cleared paddock, which also worked.  Forestry management realised that supplies of virgin pine were diminishing as the native resource was harvested and a strategy was devised to replace the resource of this valuable and versatile timber with plantations.

Over the years the best practices in all phases of cultivation were codified in a “Bible” called the Hoop Pine Technique.  This included seed collection, drying and storage; nursery practices including sowing, shading, watering, root pruning, insect control, tubing (potting in rolled metal clipped together a procedure replaced only after substantial research) and hardening-up (droughting before planting); plantation espacement (stocking rates); planting without watering after 10-15 mm rain; early plantation tending (weed control) and even cover-cropping with eucalypts in frost hollows.  All these operations were carried out by men using hand-tools such as grubbers, axes and brush-hooks as prescribed by the hand-book and between four and a dozen or so tends per year were carried out in the first few years depending on weather conditions and consequent weed growth, with cover crops lopped in the frost hollows for the summer growth period.  Green firebreaks of rainforest were left around groups of compartments each usually surrounded by roads/tracks and excessive dead material was burnt in heaps to lessen the risk of fire damage to the plantations.

To provide the best seed possible a programme of tree improvement was begun.  At first seed was merely harvested from the very best trees in the forest at an intensive selection rate.  These were grafted into clone banks or seed orchards, mated and their progeny tested so that, by the time seed was being produced, proven inferior clones could be removed from production.  Later the very best tested were left in the old sed orchards to pollinate selections made in the best tested families which were grafted within the area to short-cut the late age of pollen c.f. seed production.  Because of the big differences in “flowering” times, separate early- and late-“flowering” orchards needed to be established.

Of our native plants used commercially, probably only macadamia, duboisia and tea tree oil species have had such intensive developmental work done on them and certainly this is our only native timber species to have been at least partially domesticated.  Many researchers and experimentalists were co-ordinated to produce this wonderful timber resource.  It is something for Queenslanders to be proud of and we can easily grow one as a live Christmas tree.