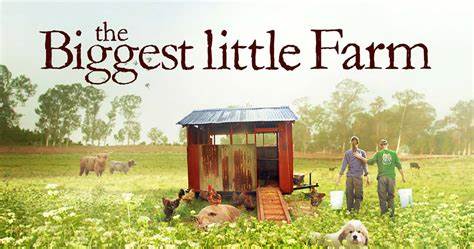 Story by Peter and Bevly Hughes 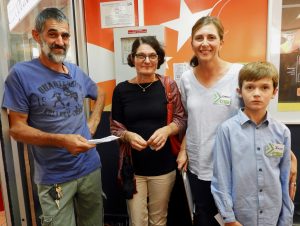 It has been so long since I went to the pictures that I had forgotten that they prefaced the main event with trailers of upcoming films. In this instance trailers, loud and colourful, were for Minions and Trolls, but a much more subdued coming attraction was Mr Rogers which has a line about ‘not being afraid in asking for help’.

This segwayed into the film being shown as a fund raiser by Gympie Landcare titled ‘The Biggest Little Farm.’

It is the story of John and Molly Chester and rescued dog Todd who had a dream of running a farm in the old fashioned way. This meant a system where all animals and crops balanced with each other and with the environment.

John was involved in the Los Angeles film industry and his ability with the camera created a professional journey from having no idea of what had to be done to farm to the finished result. After asking for help and investors, a rundown former orchard area of about 100ha was purchased about 160km north of film city.

The soil quality was certainly not the reason for selecting the site, but a good underground aquifer provided water. The poor soil meant that it had to be improved, and via the extensive use of cover cropping, compost tea and as animals were introduced, things gradually got better.

Gradually diversity was developed until different plants and animals being grown numbered 200. Many of these were heritage varieties and this gave a selling edge at various local markets. .

Chickens for egg production were proving popular and sold readily at markets, but as their numbers increased local coyotes came to visit and there were explicit photos of the damage caused. Fences were tried without success and John was faced with the choice he had not anticipated having to make of chickens or coyotes. Later better fencing and the use of Maremma dogs mostly solved the predator problem.

A large pregnant sow  finally delivered seventeen piglets, but that caused an episode of mastitis and not eating by the sow  Successfully treated she went on to have further litters guarded by a red rooster that decided to befriend the pig.

Good fruit crops were decimated by starlings, and gophers liked the better soil and became pests, digging burrows and chewing tree roots. Nesting boxes to attract owls worked, and the gopher numbers declined to manageable levels. A snail plague that was destroying fruit trees was itself eliminated by the resident duck colony.

For any readers who have experienced a farming life, the ‘disaster a day’ scenario will be familiar, but for the Chesters this seemed to be a surprise, however as each event occurred they found ways of overcoming the problem.

John’s expertise created numerous photographic gems but the sound of the winds and sights of Californian wildfires that missed the property due to a just in time wind change are enduring visions of how difficult it is to farm no matter where you live.

Gympie & District Landcare Group would like to say thank you to everybody who came along and supported us, we were able to raise a total amount of $884!