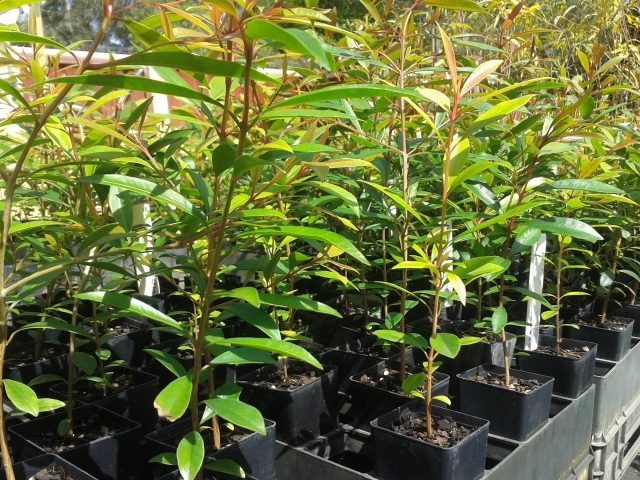 Roll up, roll up! Get ’em while they’re hot! 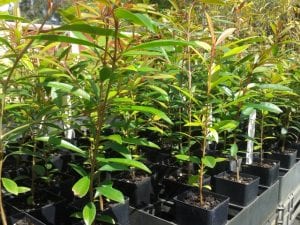 The group of plants commonly known as Lilly-pillies are popular and well-known for both landscaping and revegetation. Without bombarding you with the back-story of taxonomic jousting and re-arranging, ‘Lilly-pilly’ generally encompasses native trees of the genus Acmena and Syzygium. There have been several successful varieties, cultivars or hybrids taken from native species and customised for the landscaping industry. On the whole, those cultivars have been chosen for suitable backyard attributes, most notably ‘dwarf’ or small-form growth. In the wild, many of the native Lilly-pillies can grow into quite tall trees; though, for most of us who choose to plant one in a landscape setting, we would never live long enough to see them tower over us. That, and we often plant lilly-pillies in locations far from ideal for their optimal growth.

The latter aspect is one great selling point of this month’s plant, Syzygium Australe, or Brush Cherry. Specimens of this species can be found in the broader Gympie region; like most Lilly-pillies, they tend to live near water. The Brush Cherry though is somewhat hardier than several of its cousins – it will comfortably exist in some hard, rocky soils and 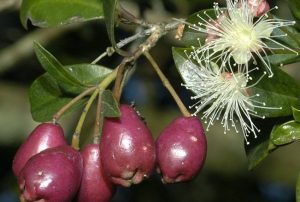 in many of our ephemeral gullies. Which means, whilst it likes water, it can handle some fairly prolonged dry spells. Suits Gympie to a tee! Just be mindful when it comes to planting in the proximity of water supplies (e.g. mains plumbing, tank overflows) – being a tree that likes water, most of the Lilly-pillies are considered as potential root-problems in seeking out water-sources.

The growth form (at least in our lifetime) of S. Australe is suited more for a hedge or screening tree rather than shade, but like most Lilly-pillies can handle pruning to suit your landscaping preferences. It is reasonably fast growing too as as far as Lilly-pillies go – just don’t expect any of them to perform as fast as good ol’ gum trees! If you’re planting one (or several) with a long-term plan in mind, then you will be able to get more canopy spread for shade.

Being more of a ‘rainforest’ (technically littoral or dry rainforest) plant, you can give them a modest amount of ‘food’. In a landscaping setting, seasonal fertilising will keep a vibrant and thick foliage cover; if you’re using them for revegetation, a ‘feed’ in their earlier stages will help them get up and over grasses and similar weedy annuals that bit sooner.

The flowers of S. Australe will typically be borne as a profusion of spring-summer bloom, with edible fruits ripening through December, but they may respond to good conditions at any time of the year with a scattering of flowers.

The nursery had a plentiful supply of seed late last year, so now we have hundreds of vibrant young tubestock available. Take advantage of this good autumn planting weather and give these lush specimens a new home today! Or perhaps on your next spare weekend, at least.