You are here: Home / Nursery / Nursery Manager’s Plant of the Month

Well… I was just asked to include a ‘Plant of the Month’ article in this newsletter. A quick mental lap of the nursery, followed by an on-foot inspection, and I had made my choice: Pararchidendron pruinosum, or Snow Wood. Such an intriguing plant, with its glorious puffball flowers, unique leaf structure and twisty orange seedpods. Not to mention it being one of the few species of Fabaceae or Mimosaceae (a Family that includes our Acacias and many other Nitrogen-fixing type plants) that grows in rainforest locations. Oh, how I was looking forward to waxing lyrically over this plant! 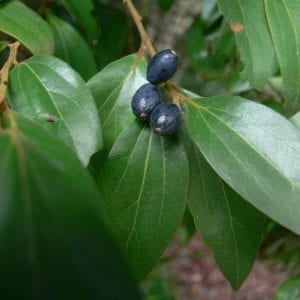 Of course, nobody else would have chosen to write about this plant any time recently, surely? That turned out to be a false assumption. Thanks to archived articles on our website, I brought myself up-to-date… Tony had done an article on this very specimen, for the December newsletter. Oh no, I’ve been out-done! Or perhaps, it’s proof that great minds truly think alike.

Well, what would be my second choice right now? How about Petalostigma triloculare – I could share with you my dream of a brilliant green hedgerow with topiary features, dripping with shiny orange fruits just in time for Christmas, filling me with joy as I meandered the path from my uber-mansion to my private marina or heli-pad… Oh… well, apart from not having any of those structures to meander between, it turns out this specimen has also been written about, back in August 2018.

With a dash of desperation, I browsed around the nursery, to find another specimen to promote. Something quirky, unusual, not-your-everyday-kind-of-plant-story. Thankfully, I’m not short of inspiration. So, without further ado, let me introduce… Cryptocarya triplinervis, or Three-veined Laurel.

Let’s see how the books describe this specimen… Tree to 20 metres… crikey, that’s gonna need a paddock for sure. Perhaps a high-value timber specimen? Perhaps not – many of the native Cryptocarya grow about as fast as an unemployed graduate pays off their HECS debt… or in rural terms, about as fast as your neighbour’s bull runs out of your heifer paddock. It likes wet places and shade (most Cryptocarya do), so where on earth can it go? What kind of sales pitch is this?

Where? Your loungeroom. Or office foyer.

I did mention unusual. 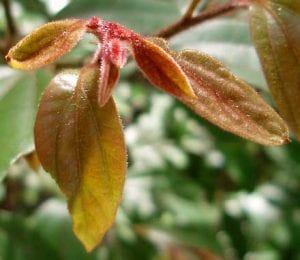 Humour me. Yes, this species can supposedly grow to 20 metres. But I can rattle off dozens of native plants with potential mature heights that would terrify most urbanites, yet those species are put in backyards or front hedges by all and sundry. The Japanese long ago mastered the art of curbing plants from reaching dizzying heights – it is known as the art of Bonsai. Not that you have to go to the extremes of that artform to keep a Cryptocarya indoors.

What gives this species, or even others in the genus, a good handicap for performing indoors is their preference for growing in shade. Cryptocarya species are quite at home germinating and growing under an existing forest canopy. So surely, an indoors setting with a modest amount of windows would suit them fine?

As for their appreciation of water… In natural settings, Cryptocarya are usually found along watercourses, or at least in soils that retain moisture for long periods. That is not to say they can’t handle a dry spell. It is after all an Australian native. Being able to tough it out for an indefinite time between drinks has been a selection criteria for plants in this country for a damn long time now, even in rainforests. So – we have a plant that will be quite at home with the occasional over-watering, yet it will also forgive you for going on (not-too-long) holidays and forgetting to ask your neighbour to look after the pot-plants.

I’m now really only left with its growth rate to find a sales-pitch for. Well… I’ll admit, if you want to take on this experiment, you may have to accept that it will be a slow-and-steady addition to your indoor world. Of course, you can hurry it along by giving it a temporary home out on the back deck with a bit more light, and you can give it a reasonable feed fairly regularly (whilst many natives do best with low-nutrient fertilising, rainforest-species are generally happy to have a bit more to eat).

Brave enough to give it a go? For about the cost of a beer or coffee, you could grab yourself a tubestock and pot it up at home. Or skip the pie or cake associated with aforementioned beverages, and you could take home a slightly bigger plant in a bigger pot. Then bit by bit, you’ll get to appreciate this dark-green and thickly-leaved character from the comfort of your armchair.

If you are more the sort of person who loves their plants enough to set them free, then give it a nice location along a gully or stream and eventually, in addition to the deep, dense foliage, you might also one day get to spot delicate little flowers, the blue-black fruit and the forest birds that seek them out for a meal. Just don’t hold your breath for that long! 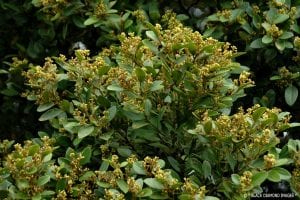 Cryptocarya triplinervis is just one of about a dozen Cryptocarya species native to this region. They are all members of the Laurel family, along with a few other genus including Litsea, Neolitsea, Endiandra and Cinnamomum.  Many people will be familiar with their exotic relative, Camphor Laurel, Cinnamomum camphora. In this context, the success of Camphor Laurel in colonising disturbed creeklines throughout our region may be no surprise – with so many Laurels already native to the region, all with fairly similar fruits, the fruit-eating birds probably had no trouble adapting their diet to include the fruit of the introduced species. And those birds were probably already in the habit of moving about the landscape in places their food grew – edges of rivercourses for example – places which suited the establishment of Camphor Laurel just fine.