This is a condition occurring widely in sown/planted pasture in central Queensland, the Burnett region and in SE Queensland.  In attempts to identify the cause and to determine what action can be taken to overcome the problem a range of activities have been initiated and are ongoing. This is being coordinated by MLA but several agencies are 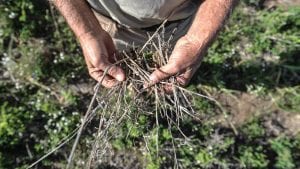 Property visits and collection of plant, soil, and water for analysis (Aug 2017)

A survey of farmers (Oct 2017).  Results indicated that dieback occurred:

As a result testing in labs and glasshouses has been done and some field trials have been started.  Field treatments being tested include burning, fertilizing, renovation, cultivation and resowing grasses, legumes and forage crops in various combinations and use of fungicides and insecticides. 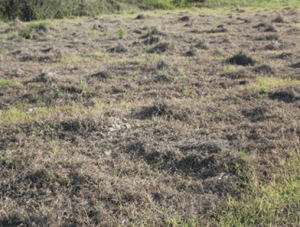 Early indications are that cultural treatments (Burning, fertilizing, cultivation) has suppressed dieback but results are variable and at this time short term, legumes can be successfully established in areas of dieback, sorghum can be established in dieback affected areas, Amistar (ai Azoxystrobin) a fungicide used to control a range of diseases in wheat, barley, ryegrass, maize and many horticultural crops shows promise to control disease in the tropical grasses.

In CQ buffel grass is badly affected but other grasses including Rhodes grass, panics, urochloa (Sabi) and creeping bluegrass have also been affected.

While this is not the first time that productivity of sown grasses/pastures has been reduced by disease/insects etc. it is by far the most widespread that this kind of condition has been observed and is impacting on many producers.  In the 1980’s buffel grass growing in the Baralaba area was seen with somewhat similar symptoms (ie reddening of leaves and subsequent decline and death in patches).  Soil pathogens were indicated as the probable cause but there were no treatments that were widely adopted by farmers.

In the 1970,s Pangola grass in NQ (wet tropics and Burdekin) was infected with a range of pathogens including leaf rust, lemma beetle larvae, aphids, root nematodes and viruses to the extent that it was replaced with other grasses (green couch and signal grass) in these intensive grazing systems.

Kikuyu grass is infected with a soil fungal type organism (oomycete) that causes yellowing (usually in late summer/autumn) each year in SEQ.

Legumes have also been affected. Of most consequent was the impact of anthracnose on Townsville stylo in NQ in the 1970’s but a range of other stylos are of little value for grazing in many parts of the world because of this disease. Using resistant species/varieties and breeding for resistance has been successful.

Lucerne is also an example with anthracnose, aphids and other pathogens and insects reducing yields and requiring major plant breeding efforts to keep it in agriculture.  I think this is also the case with some of the temperate legumes such as sub-clover, white clover, and medics.

My understanding is that there is always a range of pathogens in the soil and most of the time healthy plants can withstand some attack.  The current issue may be something new and more virulent or it may be just a change in the growing conditions that have caused existing organisms to be more damaging either because there are more bugs/fungi/viruses, or their populations have changed, or that the pasture plants are under stress from climate-related events (hot, cold, wet, dry), declining/poor nutrition or other things that I don’t understand.  Certainly, most of our pasture grasses have been used in Q now for many years and some are old stands that have declined in productivity. Initially, these pastures were very healthy growing in high N and free from insects and disease that were present in countries where these grasses grew in naturalised populations. Older pastures especially where all plants are of the same or similar age may be more susceptible although I have not heard reports that only old pasture are affected.  In fact, the occurrence seems to be somewhat random.

So I don’t think we are in entirely new territory but it is the severity and area affected that is of concern. The program being undertaken will likely sort some of the science but it will take time and is a bit frustrating to farmers who are wanting some direction so that they can make decisions about what to do in the short-term.  In the longer-term solutions that can be applied to extensive areas will need to be cost-effective.

Unfortunately, departments are not in a good position to respond quickly with very few pasture scientists actively undertaking research these days, and management (I think short-sightedly) withdrawing almost all resources from the highly productive systems in favour of other programs.  If pasture dieback is not contained it has potential to cause large-scale damage to our landscape and natural systems (erosion, sediments in streams, deterioration of the reef etc. etc.) and may even surpass the damage caused by tree clearing that has had so much attention of late.

Something a bit more local

On my small property at Kin Kin grasses most severely affected are broad-leaf paspalum, Bisset creeping bluegrass, Callide Rhodes grass (large patches of dead or near dead), Kikuyu much worse than normal in some patches and Gatton/Green Panic and Digit grasses to a lesser extent.  Setaria is affected to some extent and signal not noticeably affected.  Ryegrass and Tillage radish planted in infected areas have established and are growing well.