You are here: Home / About Us / Presentation by Graeme Elphinstone at 30th birthday 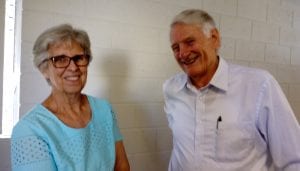 In the early days of the National Landcare movement (Gympie Landcare was formed on 4 October 1988 – the first Landcare Group in the Gympie-Wide Bay-Sunshine Coast regional area), there was a major emphasis on both soil conservation and tree planting issues.  Project funding to Landcare Groups was initially made available through the existing NSCP (National Soil Conservation Program) by the Federal Govt in Canberra, well before there was specific NLP (National Landcare Program) funding for projects.  Tree plantings by Landcare Groups were supported by the existing DPI Qld Forestry Service Tree Care Scheme, which was funded by the Qld Government.  When the newly formed GDL canvassed its members for suggestions for possible on-ground Landcare projects, there was a strong landholder interest in the many landslip problems caused by the major 1974 Australia Day floods, which had been further compounded by Gympie’s twin flood events in April 1989.  A funding proposal was submitted to NSCP in 1989 for a ‘’Demonstration of landslip stabilisation using low-cost methods’’ project on 2 separate properties.

Early GDL members Ivan & Pam Jensen at Chatsworth were seeking advice on how to rehabilitate a landslip on their property and their 0.4ha site was duly chosen for the first demonstration, despite the steep site being very difficult to access, except by foot. The first challenge was that GDL needed a work force to implement this project. Inaugural President Peter Voller had previously worked with Gympie/ Widgee Skillshare trainees on tree plantings, so a partnership was formed with Skillshare to plant, maintain and monitor the trees on the proposed landslip demo sites.

On the Chatsworth site, the preparations included constructing a runoff water diversion bank across the top of the landslip, ripping along the tree rows, spraying the groundsel bush and fencing the site.  350 trees were planted in April 1990, followed by a further 400 trees in January 1992 which included replantings.  The tree seedlings were initially proposed to be grown by the Skillshare trainees, but it was decided that the superior quality of tube stock available through the QFS Toolara Forestry Nursery should be used instead.  Species planted included Hoop pine, Silky oak, Gympie messmate plus some cabinet timbers.

The second project site chosen was on Roy Moulden’s dairy farm at Lagoon Pocket. The landslip site was adjacent to the Mary River and had initially occurred in the 1974 floods, but then re-slipped on a much larger scale after the April 1989 twin floods when the receding flood waters undermined the toe, causing it to slip again.  On this Lagoon Pocket site, the preparations included constructing a flat drain across the heel of the slip to divert groundwater away from the slip, 3-tyne ripping at 8m vertical intervals to assist tree planting, and the levelling of several hummocks to drain the water ponding swales.  The total fenced area of the landslip was 2ha.

The stage 1 planting of 1200 trees was done in March 1991 on the main body of the slip by 10 Skillshare trainees.  The stage 2 planting of 1000 trees on the upstream side of the landslip and stage 3 of another 500 trees in January & February 1992 along the downstream side, completed an open horseshoe pattern around the landslip.  Tree species used were Hoop pine, Silky oak, Gympie Messmate, Tallowwood and Blackbutt across the top and sides of the slip, and River oak, Dunn’s white gum and Forest red gum across the lower part of the slip.  Cabinet timbers were selectively planted on the patches of undisturbed volcanic topsoil.  All the seedlings were supplied under the QFS Tree Care Scheme. Gympie Messmate was the outstanding species on the body of the slip, reaching a height of 6m at 2 years old.

Interestingly, it was at the time of the stage 2 planting in January 1992 that I first met Paul Marshall, who had just been employed by Skillshare to supervise the trainees’ tree planting, mulching, watering, fertilising and weed control activities.  Paul went on to become the GDL’s Operations Manager for many years.

The extension component of the project included a Landcare field day in winter 1991 (GDL’s first ever project field day), newspaper articles in both the Gympie Times and Sunshine Coast Daily, and the production of a professional Landslip Stabilisation video which became the definitive education and training text for best practice landslip management in Queensland.

So while this on-ground landslip project work was GDL’s first venture into the realm of Landcare delivery to the Gympie district, the direction then significantly changed under the 3 year Presidency of Graham Smith (1991-1993).  In one 24-month period of frenetic activity, Graham Smith and I teamed up to conduct 18 field days, workshops, information nights, bus tours etc to address the identified priority interests of our rapidly growing and very enthusiastic body of members. It was during this period that GDL’s membership swelled from about 50 to over 200 financial members, and GDL was hailed as the largest and most active Landcare Group in Qld.

From this period onwards, my professional focus evolved from the Landcare movement to the birth of the ‘Whole of Catchment Management’ movement, and the consequent ICM planning work which led to the formation of the Mary River Catchment Coordinating Committee in November 1993.

Accordingly, I will have to leave it to others to document the evolving story of GDL’s ventures into the Tree Nursery and Environmental Tree Planting businesses, the Mary River bank restoration projects, and more recently into the breeding of biocontrol insects for the control of major weed plants eg Cats Claw vine.