Since last newsletter with my article on seed collection, you may well have overwhelmed yourself with boxes- and buckets-full of seeds, now awaiting your attention. But what to do?

Luckily for you, it’s not too technical. Sure, there’s lots of interesting scientific information about how seeds grow and what turns their germination on (or off), but for the backyard propagator (or even here at the Landcare Nursery), you can get by with a few general methods. Namely, chew ‘em, brew ‘em, shake ‘em or bake ‘em. 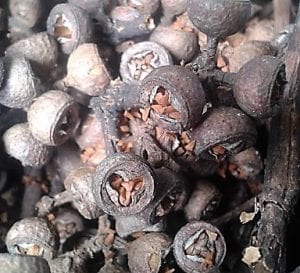 The container (i.e. a fruit) in which nature packages seeds can be broadly divided into those that are fleshy (such as plums, tomatoes, pumpkin) and those that are dry (e.g. almonds, sorghum, cardamom). Fleshy fruits are what we’re looking at with this method.

First off, you have to decide – who, or what, is going to do the chewing? For whilst there are numerous native plants with edible fruits, there are also plenty that might have you taking a one-way trip to the hospital, or (and perhaps even worse) dancing naked down the street proclaiming to be the next Messiah… then returning to this world the following day and having to explain the resultant newspaper headlines to your soon-to-be-former-employer (or spouse). So a good study of your specimen is essential before you do any of the chewing. And don’t be fooled simply by common names or appearances – there might be something that looks like a bush plum but is toxic to all but the cassowary, or relatives of the common tomato that are still laden with the poisonous chemicals long since bred out of the cultivated species.

Why then, you might ask, would one even consider this method? Well, once you’ve dodged the dangerous ones, there are some real treats out there in the bushfood smorgasbord, including flavours that can differ markedly from those we recognize in our regular foods. There’s some tongue-twisters too of course – many of our native fruits are knows for their concentration of nutrients with minimal sugars, hence descriptives like ‘tart’, ‘sour’ or ‘astringent’ are not uncommon.

My reasoning for chewing on native fruits is twofold. First, you get a free feed. Second, you can keep your hands picking, while your mouth processes. Then, when there’s little left of the fruit and you’re down to the seeds, they’re all-but-ready for sowing.

There are some benefits too for the seed collector, for having other animals chew the fruit. Ever spotted a tree laden with goodies, but out of reach? Well, perhaps you should have a look under the tree… not for fallen fruit, but for pre-packaged bundles of seeds. No, this does not always refer to animal poo. Birds might eat fruits and pre-digest the fleshy component in their crops then regurgitate a pellet of fairly clean seeds – collecting these can save your processing effort and get you far more seeds for your time. 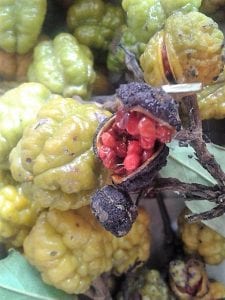 Once you have chewed, or had others chew, your seed sample, it might be clean enough to sow. Occasionally though, you might want to give it a bit more cleaning, or you have fruity seeds that you won’t eat and would just take too long to process by hand individually. So here’s where you mimic a digestive journey for your fruits.

It’s little more than starting with a simulation of chewing – this might be a rough de-flesh with your hands, rolling around on a hard surface to bruise or soften the flesh, or mechanical bashing to create a coarse pulp. Then, into a bucket of water and simply let nature turn it into an ungodly stench.

The bucket phase can be tweaked to suit the sample you have. Perhaps the fruits are not as soft as you’d hoped – in which case a second bash-and-brew might be in order. Or perhaps they were chewed fruits that you just wanted to tidy off – so it could just be a few hours to free the seeds from the remaining flesh. Again, do a bit more homework on your species in question and don’t be scared to experiment. I’ve heard of very successful experiments with a certain well-known soft-drink, thanks to its high sugar and acidity. You’ll get your own tricks and rules-of-thumb soon enough.

The ‘brew’ can also double as a means to hydrate the seed or dilute inhibitors from the seed coat, to hasten germination. But for now, it’s probably best to consider it as a de-fleshing process and keep the soaking separate – a little less chance of drowning the seeds that way. 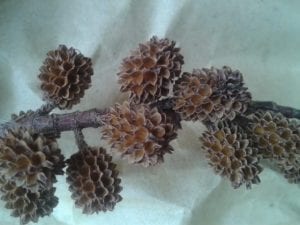 If your seeds are of the dry type, you’re at this step already. You can also use this step for chewed-and-brewed seeds that have then been dried out enough ready for storage.

Initially, it’s simply a step to encourage the seeds from their shelter. Some, such as Eucalypts, will open the pods with a good day in the sun so it’s not much more than several seconds of tossing them around in a bucket. Others such as Rhodosphaera rhodanthema will have very woody pods that need substantial scarification to expose the seed, which could mean your ‘shaking’ ends up quite mechanical such as tossing the seeds into a cement mixer with a sharp, coarse gravel.

After a rumble and tumble, your shaking can be refined to then separate the seeds from the empty pods, husks, frass or dried fruit remains. Gravity will be your friend on the most part – shaking through a sieve (or series of sieves) to separate out the seed based on size; vibrating the mix to settle the heavier seed to the bottom of your container and allow the lighter debris to be discarded from the surface; winnowing the seed by blowing frass from the surface of the mix or pouring it all in front of an electric fan.

Sometimes it might be of use to process your seed with a ‘wet’ shake, essentially combining most of the above methods. But this can also mean more work – if you’ve had dry-type fruits and want to wash-and-shake, you will then have to have another step to re-dry them to sieve or store. 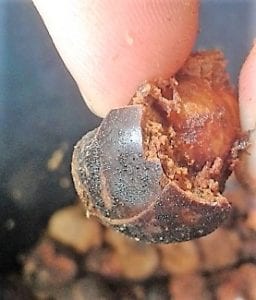 I’ve already mentioned a mild example of this step, namely putting Eucalypt seed in the sun to heat up the pods and dry them out – the result is the pods then opening. This is known as ‘dehiscence’ (the process) or ‘dehiscent’ (referring to the pods themselves). It is a work of nature fascinating for its simplicity – when the moisture content of the seed pod reaches a certain low-point, the woody tissue changes its characteristics and capsules open. It may be rather gentle, like in Casuarina, or it may be quite explosive, such as for Hovea or Petalostigma. If you have any of the explosive types, be sure to keep them in a paper or material bag so that they can still dehisce but not then spread themselves all over your kitchen.. because all good seed collectors do this step on their sunny kitchen window bench, right?

You may have gathered up some seed pods that simply aren’t responding to a day or two in the sun. Or you’re in the middle of a cold, rainy spell (sigh… if only) and you’re too impatient to wait for the hot weather to return. This is where you get to set free your burnt-toast-making skills.

The drier types of Australian flora have been subjected to fire in the landscape for quite some time now. Some plants, such as Hakeas or Banksias, are now well suited to such a disturbance. Their seed pods are so woody that it typically takes the heat of a short burst of fire to finish their dehiscence. 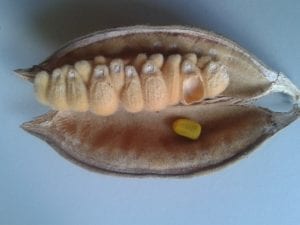 Using fire to encourage your seed sample from such pods can be achieved without having to start your own bushfire though. Having a small pile of leaf litter or sawdust with the pods on top can produce enough flame or smouldering heat to do the job. Dousing the pods in some methylated spirits and setting alight is another method. Putting them atop the barbeque or in a fan-forced oven could work also. The one thing to watch is that you don’t end up applying too much heat once the seeds become exposed.

Another element of this ‘baking’ method is the chemistry of smoke. It is still largely a mystery to us, but there is enough understanding to know that compounds in smoke can have a positive effect on seed germination for a range of species. There is probably something happening in the seed coat that ‘wakes up’ the seed inside, by adding new chemicals or by neutralizing chemicals that act as inhibitors to seed germination. Fortunately, the benefits can be obtained without needing to fully understand it. If you choose to use fire to open your seedpods, then you are likely to have enough smoke around as the seeds are exposed to get some benefit. Or, you can create ‘smoke-water’ by having a container of water in or near a fire, so it absorbs some of the chemicals (just like your clothes smell like campfire the day after). The smoke-water can then be used to water your seed-trays. Or you can even get fancy and built a little smokehouse, into which you can place a tray with soil and seeds already sown and watered! Just don’t do to the tray what you do to your neglected toast… 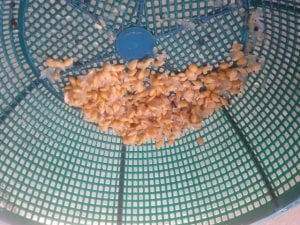 With one or more of the above combinations, you can harvest and process even the most obscure of seed samples. How technical you make the process is up to you – it may be that you collect samples that are no trouble to simply process by hand. But as you get more eager or add more species to your repertoire, at some point you’re bound to chew, brew, shake, or bake.