You are here: Home / About Us / Summary of the May Annual General Meeting 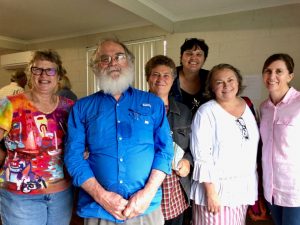 The 31st Annual General Meeting for Gympie Landcare was held on Wednesday 15 May . The well attended meeting saw the presentation of reports from the President and Treasurer, both of which highlighted the sound position  in which the organisation finds itself.

There was some respectful debate in relation to the motion regarding adoption of the new  constitution, but ultimately the members overwhelmingly approved the motion to adopt the proposed new constitution which had previously been circulated, after amendment  from the floor to add the positions of  Vice President and Minutes Secretary to the Management Committee  .

There was only one nomination for each of the executive positions on the Management Committee, save for the General Member positions  where there were four nominations for three positions.

Ernie Rider was also granted an Honorary Life membership , in acknowledgement of his long  and dedicated service to GDLC.

Following conclusion of the formal portion of the meeting, Graham Elphinstone gave a presentation on the early field days of GDLC .Apart from some technological hiccups with a recalcitrant projector, it was interesting to see that even in the 1990’s  GDLC  was clearly way ahead of the rest of the community- the topics canvassed at the  ‘old’ field days  are more relevant today than perhaps they have ever been.

As usual, the meeting concluded with refreshments, and the opportunity to catch up with like minded others.