You are here: Home / Nursery / The Trials Of Manipulating Nature

Ah, the trials of manipulating nature! We are a stubborn species, us humans.

There seems no end of things to complain about in the very controlled, manipulated setting of a commercial tubestock nursery. Wind back the clock a month or so, and you would have found me complaining about the extended hot and dry weather leaving patches of dead or wilting plants in all sorts of places about the nursery. Now that it has cooled down and nature has delivered a run of steady rain, I’m complaining about plants dying from too much water.

Isolating a germinating plant from the vast soil resource that we commonly refer to as the surface of the planet, then attempting to grow it in a very very small sample of a very particular form of a soil substitute, often seems to me to shout volumes about our arrogant approach to controlling nature and our obsession to live apart from nature, rather 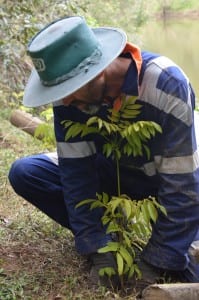 than acknowledging we are a part of it.

First, we ditch the notion that growing a plant in its natural soil is a good thing. Instead, we decide to be an accessory to employing heavy machinery to pulverise bark from exotic pine plantation harvests (the plantations and harvests themselves employing vast amounts of machinery and landscape in their own right) into a fine blend of bark chips and particles. Then it is piled up in a very particular way, given a very strict timeframe and temperature regime to partially compost it to a neutral pH. Tested, sieved and graded, almost ready to stick into a plastic pot to grow a plant.

Except that composted pine bark is about as nutritious for a seedling as an ‘edible’ ricepaper or banana-leaf takeaway plate would be nutritious for you. Composted pine bark is also about as good at holding moisture as a sieve is. If you pour the water in fast enough, sure, you can fill the sieve, but don’t expect there to be much of that water remaining when you come back after lunch. 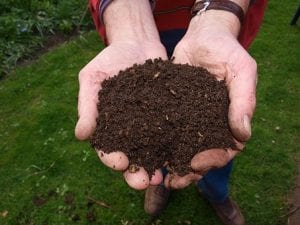 So humans, still dissatisfied with this proto-soil concoction, decide to add more goodies to it in an effort to mimic nature. Perhaps coconut fibre or vermiculite will help the water stay in the mixture longer? But what if it keeps too much water in? Perhaps we should add some sand or perlite to get the mix swinging back towards being the open sieve it was in the first place? Then what if our tinkering has buggered up the pH? We could always chuck in some lime or dolomite or gypsum. Hopefully, it doesn’t turn the mix to a mild form of cement. Then let us not forget about some kind of sustenance for the plants we hope to grow in this concoction. How about a ‘Goldilocks’ of nutrient serves? Delivered steadily to the plant for months at a time? Crikey, we’re gonna need a whole new laboratory to design something called ‘controlled release fertiliser’.

And voilà! There you have it. A truly cosmopolitan, multicultural, transcontinental substitute for real soil. With ingredients hailing from almost everywhere except where your cherished little seedling came from. An obscene amount of embodied energy; an ecological footprint that is far too big a shoe for your little seedling to ever grow into. Perfectly blended to give the best combination of food, air, and water.

Except when there’s not enough water. Or too much.

It’s a tough gig, wandering around a nursery having to find things to complain about when they’re not ‘just right’!

So what to do, what to do? I could try turning off the sprinklers on the rainy and cloudy days so the little Lomandras and Acacias don’t drown to death. But then what if it doesn’t rain enough to keep the bigger, thirstier plants satisfied? Or, horror of horrors, what if it isn’t just death by drowning?

This round-a-bout bedtime-story-esque rambling has a point to it, of sorts. The Gympie Landcare nursery might have 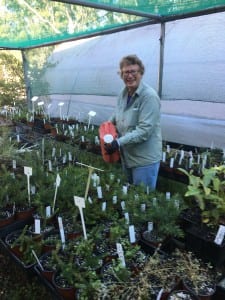 100 or more different species in production at any given time; any of those species could be present in the nursery from just-germinated seedlings, through several batches and sizes of tubestock, to advanced plants in larger pots or bags. Each of those species and each of their ages will have a preference for optimal growing conditions. The idea of a highly manufactured potting media is but one of the approaches to try and find a happy medium (pardon the horticultural pun) for as many of the variables as possible. Moisture retention and porosity (the gaps in between the particles in the potting media) are two of those factors, and a run of rainy weather will bring those parameters to the fore, perhaps as I initially noted, by causing plant morbidity or mortality.

Not that the nursery is a graveyard of plants. But the difference between green and dead is where ‘artform’ and ‘science’ meet. Humans have built a lot of tools to monitor and control environments for growing plants; some of those tools would be well beyond the budget or suitability of your humble Landcare nursery. But no matter the technology, nature will still deliver more variables than our technology can cover for, and that is where human observation and response remains a key ingredient.

In a nursery of thousands of plants, noticing a few with wilted leaves is akin to noticing the proverbial gate to the horse paddock is open – but thankfully the horses still seem content in the paddock. A few wilted plants in the nursery is a visual sign that there is change afoot; over the past few weeks of rainy weather, that change would at first seem to be related to moisture in the pot. When those wilted plants start to number in the few percent for a given batch of tubestock, the questions arise. The horses could be nudging that gate open again.

At one extreme, it could be an outbreak of soil pathogens – thankfully this is the rare circumstance. Most commonly it is simply a case of enough water being held in the potting media to fill up most of the breathing spaces for the plant’s roots, then it’s either death by drowning or associated root-rot. But even then, if it is still not affecting a large variety of plants, there could be other variables to investigate. Was loss limited to a particular species or batch? If so, perhaps there were variables in the propagation and potting stages; with many different hands involved in the task, each with their own approaches to propagation, it could be slightly more soil-compaction in a pot that causes a batch to hold more moisture, or slightly deeper potting of the seedling which results in moisture held around the fragile shoot-growth zone. Beyond that, it could even be an aspect of the species or seeds themselves – if the seed came from a parent plant that was accustomed to drier conditions, or particular soil chemistry, or simply had ‘runt’ traits, then perhaps the loss we see in the pots is somewhat inevitable and ideally could have been avoided earlier in the process with more stringent grading of the seedlings themselves. 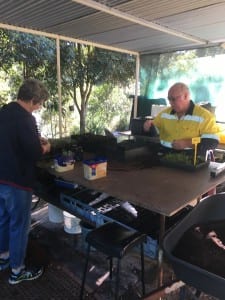 For me, it seems when working with nature, accepting we are a part of it and not apart from it, that no matter how much planning one puts in place, it is responding to the vagaries of nature that is key. That responding is where the art and the science combine, each willing to concede to the other for the greater good. A nursery, despite all efforts by humans to manipulate nature, still has at its core the vagaries of nature. It definitely makes for an interesting workplace!

So am I really complaining? Call it poetic license. It is never a pleasure to find some of one’s own, or someone else’s, devoted propagation efforts have keeled over. But it is part of the process and always a chance to learn and improve. And through the last month, the nursery has still done a good job of producing thousands more healthy vibrant tubestock and has seen thousands more go to good homes out and about the Gympie region.

One hundred plant species. A hundred gates, to a hundred paddocks. With 30,000 horses. Here’s to hoping none of them get the idea of bolting. Unless they’re bolting upwards (just couldn’t resist one last abstracted horticultural pun).