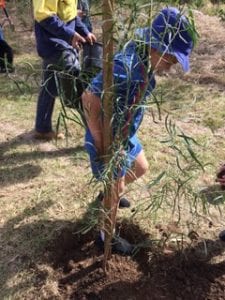 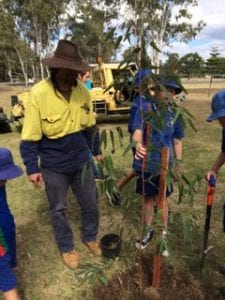 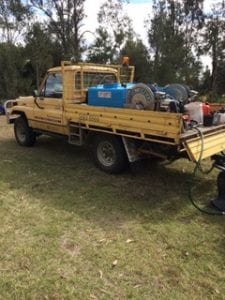 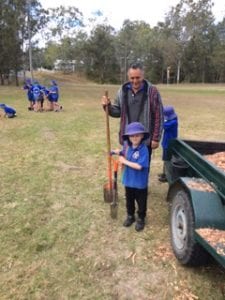 Widgee State School Preparatory and years 5 and 6 took part in a hands-on tree planting in Webb Park, Widgee in August. Over the last three years,  Gympie Landcare has spearheaded a Gympie Regional Council Enviro-Levy funded revegetation project along the Widgee Creek and in the Webb Park area.

Widgee State School pupils have enthusiastically taken part in the project and are rightly proud of their previous efforts. Tube stock Koala & native wildlife habitat trees are once again flourishing in the project area.
This week the planting was all about dealing with more mature plants. Hands were dirtied with water crystals, which were then mixed into the soil before planting trees. Water buckets were on hand for cleaning up muddy hands so as not to upset the laundry fairies.
Hardwood bark finished off the process under the watchful guidance of Gympie Landcare’s Contract Land Services Manager, Carl Schefe, who oversaw the activity.
NB: No children or teachers were harmed in this activity and slave labour was not employed  – but much fun ensued.
For more information on Contract Land Services click here